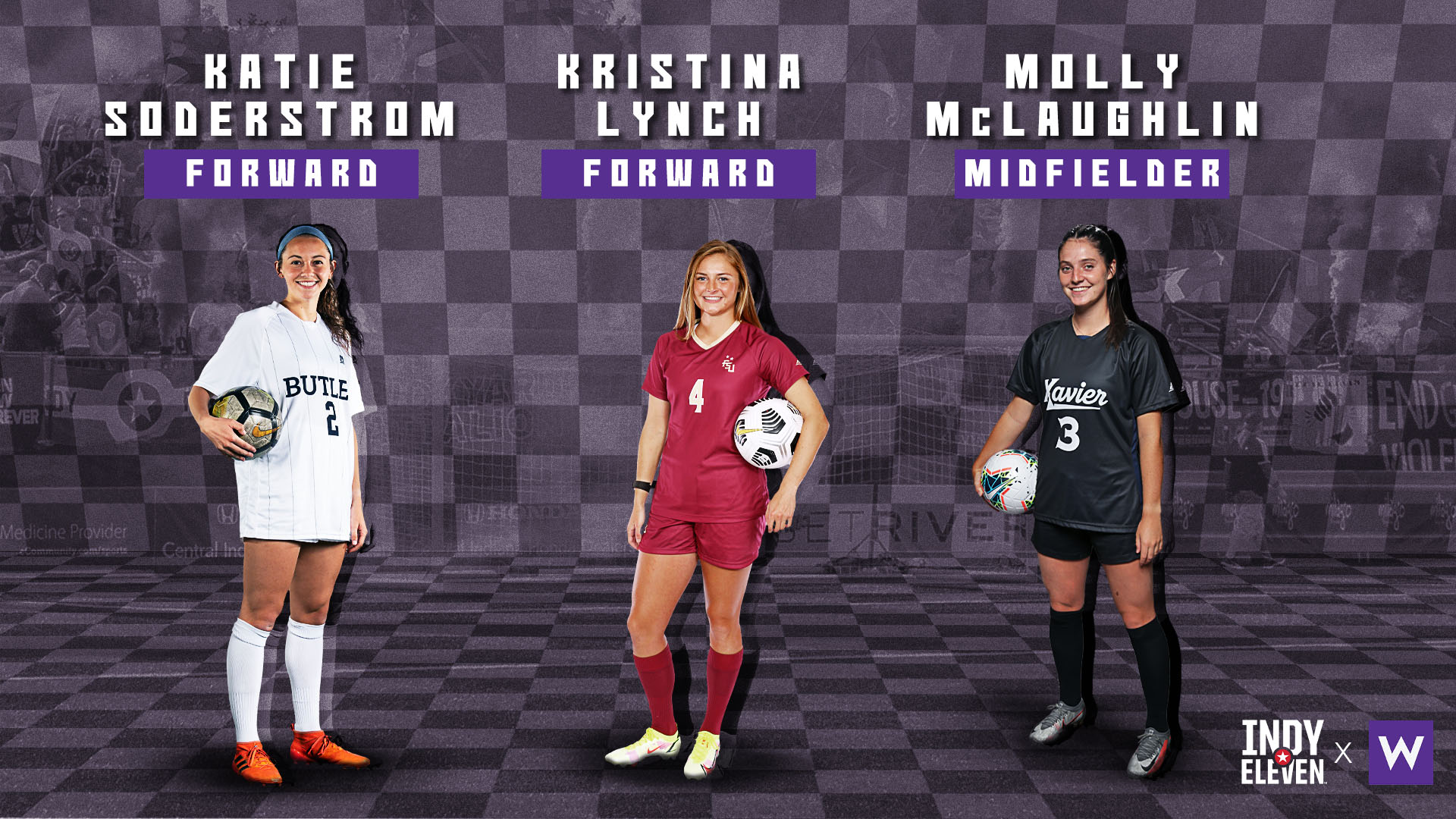 The new Indy Eleven trio are the second, third, and fourth players to commit to play in the burgeoning pre-professional league, which follows South Georgia Tormenta FC forward Elise Holcey’s signing on November 19. The W League continues to grow its footprint across the country, with 33 teams now confirmed to hit the field for its inaugural season next summer.

“The signing of Katie, Kristina, and Molly hits all facets of what we are setting out to achieve year one in the W League,” said Dolinsky. “All three players have Indiana ties from a youth development perspective, have found success collegiately, and have bright futures in soccer post college if they choose.  We are extremely excited to have the girls play a large part in the success of our inaugural season.”

Soderstrom will continue to develop close to home coming off the heels of her Redshirt Junior season with Butler University, where she started in all 21 matches for the Bulldogs and led her team with 32 points on 12 goals and eight assists. The Carmel High School alumnus’ consistent performance since her debut in 2018 has seen her move into the Bulldogs’ all-time record books at sixth in career points (60), sixth in goals (28), and fourth in assists (24); in addition, her standout 2021 campaign saw her set single-season top ten performances that ranked her fourth in points (32), fourth in goals (12) and tied for seventh in assists (8).

“I am so excited to be part of this team as we transition into the W League. It means a lot to me to have the opportunity to compete at the highest level, so close to my home, and with so many familiar faces and teammates,” Soderstrom said. “I am truly honored to be part of the first group of women’s senior team signings. I look forward to the opportunity to compete for Indy Eleven this summer!”

Soderstrom will continue adding to her list of collegiate accolades as she plans to use her fifth season of eligibility during the fall of 2022 after having her 2020-21 season impacted by the COVID-19 pandemic. The midfielder’s long list of plaudits includes placements on the 2021 BIG EAST Championship All-Tournament Team, All-BIG EAST First Team (2019, 2020-21, 2021), United Soccer Coaches All-Region First Team (2020-21, 2021) and Third Team (2019), and College Sports Information Directors of America’s (CoSIDA) Academic All-America First Team (2021) and All-District First Team (2019, 2020-21). Prior to joining Indy Eleven, Soderstrom played for Westfield-based Lady Victory FC of the Women Premier Soccer League (WPSL) under Dolinsky during its own inaugural 2021 season, when she earned a spot on the Midwestern All-Conference Team and Central Region Offensive Player of the Year recognition.

The Indiana Fire Juniors and Indiana ODP youth product Lynch will return to the Hoosier State after helping the Florida State University Seminoles claim their third NCAA National Championship on December 6. Lynch finished her Senior season having played 24 games (16 starts), during which she tallied five points with two goals and one assist across 1,004 minutes of play. In total, the Granger-born forward made 71 appearances (51 starts), scored 12 goals, and notched three assists during her collegiate career, which began in 2018 after finishing her time at Penn High School. Lynch’s academic success also earned the Biology major her second appearance on the CoSIDA Academic All-Region Team (2019, 2021), adding onto a long list of accolades including NCAA Elite 90 Winner (2020-21), FSU Golden Torch Winner (2018, 2020), All-ACC Academic Team (2018, 2019) and NCAA National Champion (2018, 2021).

“I am so excited to be a part of club history as one of the first group of women’s senior team player signees. This is a huge step for women’s soccer in Indiana that will create many opportunities for future players to compete at the highest level,” explained Lynch. “It is truly special returning to my home state and playing for the Indy Eleven W League Team and their incredible fan base. I am looking forward to the great competition that will further develop me as a player and I will do my best to help bring home a championship.”

McLaughlin – like Lynch, another Penn H.S. product out of Granger – finished her Senior season at Cincinnati-based Xavier University having tallied six points and three goals in 20 matches (all starts) that she played for the Musketeers enroute to the team’s second BIG EAST regular season title. Following the season that saw Xavier record a school-best 16 regular season wins and 10 shutouts, McLaughlin’s standout performance in the midfield earned her a spot on the 2021 USC All-Region First Team as well as the All-BIG EAST First Team and All-Tournament Team alongside Soderstrom. Prior to her 2021 season, McLaughlin was named to the 2020 All-BIG EAST Second Team after scoring twice in nine games (all starts) during the COVID-abbreviated season and earned spots on the BIG EAST All-Tournament Team and Second Team in 2019 after helping secure Xavier’s regular season and tournament wins, as well as the program’s first-ever NCAA Tournament victory.

“I am super excited and honored to be joining Indy Eleven for its inaugural W League season,” said McLaughlin, who will also utilize her fifth season of collegiate eligibility during the fall of 2022. “This is such a great opportunity for women’s soccer and the city of Indianapolis. I am extremely proud to join Indiana’s Team and I look forward to building a solid foundation for young girls in our region and across the country.”