W League Team of the Month: May

The first month of the inaugural W League season is in the books and there have been incredible performances across the board. Brilliant goals, wonderful goalkeeping and steadfast defense were front and center through the month of May.

This list has been chosen based off of matches from May 6-June 7. 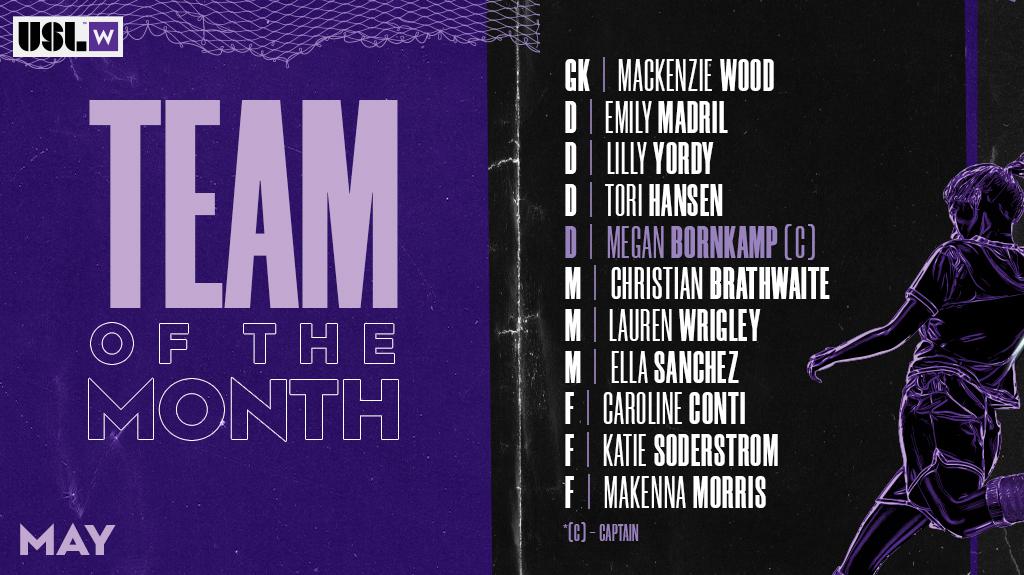 GK – Mackenzie Wood, Indy Eleven: Appearing in all five of Indy’s matches this season, the former Northwestern goalkeeper has accumulated 26 saves, allowed less than one goal per match and recorded two shutouts.

D – Emily Madril, Racing Louisville: Appearing in all six matches for Louisville, Madril’s 1 v 1 defense in the final third has been a large factor in the team’s three-match winning streak – two of which were shut outs. From the backline, the Florida State Seminole also has two goals.

D – Lilly Yordy, Kings Hammer FC: While Kings Hammer hasn’t had the hottest start to the season, Yordy has been a staple in the team’s backline, tallying over 540 minutes through six matches. The University of Louisville defender’s left foot service and 1 v 1 defense has set her apart.

D – Tori Hansen, NC Courage U23: The Tar Heel defender has helped the Courage go undefeated in the team’s last four matches by controlling the backline. Hansen has also gotten on the board when she scored the team's only goal in the Courage’s tie against Asheville City SC.

D – Megan Bornkamp, Greenville Liberty SC: Center back Megan Bornkamp has helped guide Greenville to a successful first month of play as Greenville currently sits undefeated. Bornkamp, who is a rising junior at Clemson University, has been instrumental in the Liberty’s hot start, even tallying three goals for the team.

M – Lauren Wrigley, Morris Elite SC: Wrigley has appeared in all five matches for Morris Elite, leading the team in scoring with four goals. The University of North Carolina Tar Heel has been a difference maker for the currently undefeated Morris Elite.

M – Ella Sanchez, Racing Louisville: Sanchez has been integral to Louisville’s current three-match win streak. Sanchez is crafty in the midfield and has found the back of the net in her team's 4-1 win over Flint City AFC.

M – Christian Brathwaite, Greenville Liberty SC: The 17-year-old had a great first month of play in the midfield for the Liberty, tallying a goal and a pair of assists. In addition, Brathwaite received Goal of the Week honors in the week 3 after a long-distance shot from outside the box into the upper left 90.

F – Caroline Conti, Greenville Liberty SC: The Clemson Tiger contributed to all three of Greenville’s goals in the teams 3-1 victory over Asheville, scoring off a free kick which was nominated for Goal of the Week and providing a pair of assists. Conti currently sits with five goals on the season.

F – Makenna Morris, McLean Soccer: While Morris has only appeared twice for McLean, the Clemson Tiger has made an immediate impact – recording braces in both of those matches.