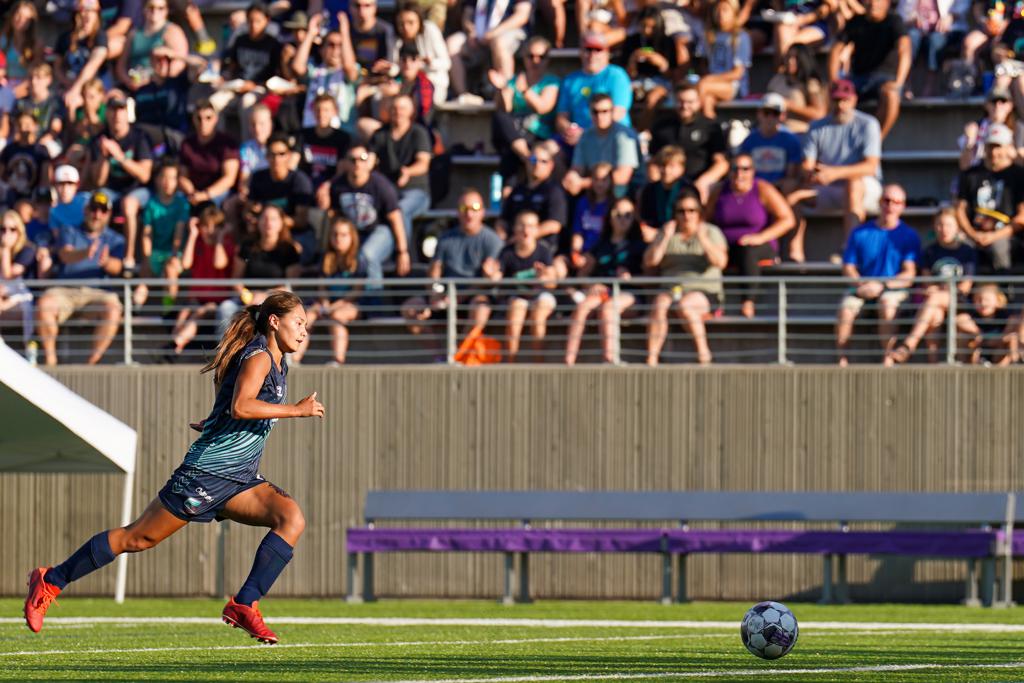 South Georgia Tormenta FC picked up an impressive 1-0 victory on the road against previously undefeated FC Miami City, with the visitors making a strong right out of the gate with a solid chance in the first minute as Amy Andrews laid a pass off for Jenae Packard, only for Miami's goalkeeper Melanie Lefebvre to make an impressive double save to keep the game level.

One of Miami City’s best chances came in the 13th off a beautiful ball from the corner which unfortunately went out for a goal kick.

The breakthrough for the visitors came in the 62nd minute, however, as W League Golden Boot winner Andrews received a low cross from the left by Elis Nemtsov and finished perfectly. Miami would go on to have a few other chances, including a tough test for Sydney Martinez in the 88th minute but would ultimately be unable to find the back of the net.

Elis Nemtsov sent in a low cross from the left side, which set Andrews up perfectly for the close-range tap in.

Greenville Liberty SC emulated the postseason success of the organization’s USL League One side as it took a 2-0 victory against the Long Island Rough Riders. From the opening whistle, Greenville felt a step ahead as it created multiple chances on goal before finding the back of the net in the 37th minute through Caitlyn Reilly.

Long Island played a physical match, but was unable to keep up with the pace of the Liberty, who doubled their lead in the 70th minute as Julie Macklin found the net to book a place in the W League Semifinals.

Reilly received the ball from Cayelli outside the 18-yard box, dribbled past a defender and delivered a low finish to the right corner, underneath the goalkeeper.

Mackin received possession deep in her own territory, drove forward up the left wing and cut back before firing a strike that floated over the head of the Long Island goalkeeper.

In the highest scoring match of the quarterfinals, McLean Soccer produced an eye-opening 8-0 victory against hosts Morris Elite SC that saw seven different players find the net for the visitors. While Morris Elite had a few chances on goal, two goals and one assist by Angela Caloia powered McLean to an emphatic victory.

McLean scored twice in three minutes as it broke the deadlock around the quarter-hour mark through Eliza Turner and Julia Leas on the way to building a five-goal halftime lead. Caloia bagged the fifth, and then added her second goal of the night five minutes into the second half before Kendall McBride and Lauren Meeks rounded out the scoring.

Turner intercepted a pass and dribbled 10 yards upfield before delivering a high-angled shot from 20 yards that floated over the goalkeeper's head.

Leas played a cheeky little give-and-go at the top of the penalty area before shooting low to the corner.

Felton received the ball in the box, shook off a few defenders, cut the ball back and fired home a low finish.

Aleigh Gambone beat her marker with a sweet dummy to create space before crossing from the byline for an Erike Harwood tap in.

Caloia picked off possession from the Morris Elite defense and shot from the top of the box, sending the ball over the goalkeeper's head.

Gambone picked up her second assist of the night as her low cross was finished from the edge of the six-yard area by Caloia for her second goal.

McBridge made a clever turn past her defender at the edge of the penalty area before chipping it over the goalkeeper at the far post.

Breaking onto a long through-ball by Stephanie Christianson, Meeks produced a great shot from outside the box to close out the scoring.

In a matchup of undefeated sides, Minnesota Aurora FC rallied to claim a 2-1 victory against Indy Eleven, providing all the drama fans could have hoped for. After a back-and-forth opening 20 minutes, the dramatics began in the 23rd minute when Minnesota was called for a handball in the penalty area, giving Indy a chance to take the lead from the spot. Aurora goalkeeper Sarah Fuller guessed the correct side and saved the penalty kick, keeping the score level at 0-0.

Indy Eleven took the lead in the 34th minute, however, as Ella Rogers put the visitors ahead at the break. Inspired by another big crowd at TCO Stadium, Minnesota hit back four minutes into the second half as Morgan Turner produced an outstanding finish from 20 yards to the top-left corner of the net to bring the hosts level. Aurora then capitalized on a penalty kick of their own as Mayu Inokawa’s finish put the hosts ahead in the 66th minute, and from there Minnesota’s defense held the potent Indy attack in check to secure a Semifinal berth.

Chatterton split a pair of defenders with a pass to Rogers inside the left side of the penalty area, and Rogers produced a fine finish to the right corner for the visitors.

After a good piece of control and layoff by Cat Rapp at the top of the penalty area, Turner curled a brilliant finish to the top-left corner of the net from 20 yards.

After Maya Hansen was brought down in the penalty area, Inokawa’s slow approach was followed by a precise shot to the left corner just past the Indy goalkeeper’s outstretched arm.